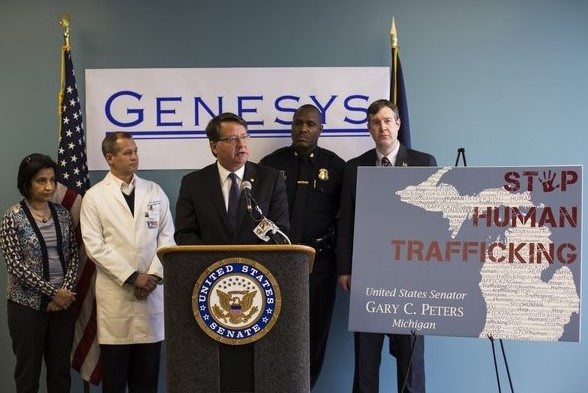 Posted at 10:08h in Human Trafficking in Michigan by Lauren Schultz

In an email sent Tuesday, July 21, 2015 to law enforcement agencies across Michigan, the Michigan State Police claimed that only three incidences of human trafficking were reported statewide in 2014 by local law enforcement.

The crime has been a hot-button issue for state Attorney General Bill Schuette since he took office in 2011. His office boasts an initiative established early in his term to prosecute human traffickers, and he oversees a commission tasked with investigating the issue.

The low number of reports doesn’t necessarily indicate that human trafficking crimes aren’t happening in the state, according to Schuette’s spokeswoman, Andrea Bitely.

The state began collecting data for 2014 on two new categories of human trafficking offenses, particularly crimes related to prostitution and involuntary servitude, in order to comply with the Federal Bureau of Investigation’s Uniform Crime Reporting Program.

The FBI began collecting offense and arrest data in January 2013 regarding human trafficking after a 2008 law was passed requiring them to gather the information, according to FBI spokesman Stephen G. Fischer Jr.

Fischer declined to comment if other states reported similarly low numbers of reports in 2014, saying those statistics wouldn’t be released until later this year.

The Michigan Commission on Human Trafficking, in a 2013 report to the Legislature and governor, claimed that trafficking-related crimes may be underreported as many trafficking victims do not identify themselves as victims.

Trauma bonds, psychological manipulation and mistrust of authority figures may prevent victims from coming forward, according to the commission.

Genesee County Prosecutor David Leyton, who serves on the state’s human trafficking task force, said he wasn’t surprised to see such a low number of incidents reported to the State Police.

Learning how to identify when a person is actually being victimized is a major goal behind the commission, Leyton said.

“Training is a vital piece of what we’re doing at the human trafficking commission,” Leyton said. “We want to do some intensive training.”

The state police, in its email, said it would work to provide additional training, intelligence and case support to assist law enforcement in identifying human trafficking situations.

The goals of the trafficking commission go beyond just training law enforcement officers.

Medical personnel, counselors and other groups that deal with individuals at risk for trafficking are receiving extra training to help identify possible trafficking situations.

Leyton said the publicity brought to the issue can also help the public learn to spot possible trafficking victims.

Signs such as an individual not knowing their address, not having identification or not being allowed to freely interact with other people could all be signs of a potential trafficking situation, Leyton said.

Both Schuette’s office and Leyton said they expect to see the number of cases of human trafficking reported by law enforcement agencies increase as awareness and training on the issue continues.

“It’s certainly out there on a smaller, local scale,” Leyton said.

View the original article and related video on MLive.com.