Mindy Hughes is a sex trafficking survivor that has overcome the trauma of her experiences and is now a passionate abolitionist, mentor, and advocate for other survivors across Western Michigan. Today a wife and mother of four, her life has been completely transformed by her faith in God and she has found a variety of ways to help spread the hope that she has found. She is dedicated to increasing public awareness, supporting fellow trafficking victims and vulnerable youth at risk for trafficking, and equipping other survivors to become anti-trafficking advocates. In 2015, Mindy was awarded the Michigan Liberator Award.

Mindy operates CUBS, a ministry for youth at risk for trafficking, which is supported by Women at Risk International (WAR). As a Momma Bear for CUBS, Mindy supports vulnerable young men ages 14 to 21 who are residents of Newaygo, Oceana, or Muskegon counties. These young men are at risk either to be trafficked or become a trafficker. To provide consistent support and encouragement to them, Mindy takes them organizes outdoor activities, movie nights and Sunday dinners for her cubs and throughout the years, she has impacted the lives of over 90 young men.

Mindy is involved with several other anti-trafficking organizations. She is a member of the Michigan Human Trafficking Task Force, a coalition of over 90 member agencies that are working to prevent trafficking, pursue prosecution of perpetrators, and protect trafficking victims, and the National Survivors Network. Since 2008, she has served on the Advisory Board of The Hope Project, a faith-based organization in Muskegon, Michigan dedicated to supporting survivors through case management, mentoring, and counseling, as well as and raising public awareness. She is an Advisor for the Step Forward Program, a 12-step initiative to help trafficking victims through the healing process. She also has worked with the Michigan Women’s Foundation and alongside Songs Against Slavery to increase awareness of trafficking through benefit concerts and musician partnerships.

Mindy is also a legislative advocate and consultant for those in state government. She is working with State Senator Judy Emmons, who has been collaborating with several survivors to craft anti-trafficking legislation. Mindy has been active in the formation of several legislative bills in the Michigan Senate, including SB 584 – SB 602, which are part of the Human Trafficking Bill Package. Among other things, these bills eliminate the statute of limitations for trafficking offenses, increase the minimum age from 16 to 18 for prostitution-related crimes, provide legal channels through which law enforcement is able to determine if a young person found committing an act of prostitution is a victim of human trafficking and refer them to the Department of Human Services for assistance, and allow a trafficking victim to introduce evidence of being a trafficking victim a legal defense for certain types of crimes. 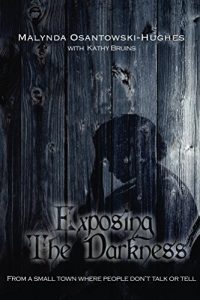 Another important part of her ministry, Mindy is dedicated to sharing her own story. She has written a book entitled Exposing the Darkness: From a Small Town Where People Don’t Talk or Tell and has been featured on television, live radio and in newspapers all over the state of Michigan. Mindy speaks at churches, schools, colleges and public events to increase awareness of sex trafficking. Both in her book and at speaking engagements, she talks about her experience of being trafficked in a small farming community in Michigan. Additionally, Mindy has shared her story in multiple video projects and television broadcasts, including a Civilian First Responder Training film, appearances on the Christian Television Network, and a Trafficking Awareness Training Curriculum for Healthcare Professionals being created by HRGlocal and Lakeland Hospital System in Berrien County, Michigan.

If you would like Mindy to speak at your church or civic group, please contact her via email.